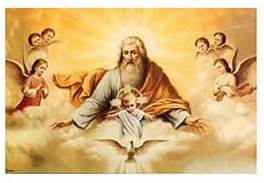 People tend to get caught up in understanding the Trinity of the Christian God. It confuses people that a singular God is known as three entities. As with most misunderstandings stemming from the complexity of an infinite God, we have to step out of our limited understanding and into the vastness of God. We serve a God who wants His people to know Him and to understand Him. He must reduce His complexity to fit the fallen and limited minds of His people. How better to do that than as a Father. This was first given to us by God describing the heart of David in (Psalm 89:26) ‘You are my Father, my God, and the Rock of my salvation.’ (2 Samuel 7:14) “I will be to him [David and his eternal lineage thru Jesus] a father, and he shall be to me a son.” The prophets Isaiah, Jeremiah, and Malachi reiterate God as Father before moving into the New Testament era. We can all relate to a father figure and what that title entails. God relates to His people as the Father God and then comes to earth to relate to us in our own form, as The Son: Jesus. Jesus is our example of God walking the earth. He was the Holiness and perfection of God in the flesh. In order to show us how to relate to our Heavenly Father He became the Son and subsequently our brother. He then, through that perfect life, became the required sacrifice for the sins of man. The price of sin has always been death, ever since the fall. God as The Son received our penalty so that we may be reconciled to Him. He sacrificed Himself for His children. As the perfect Father would. After His earthly presence was persecuted and killed He defied death and the deceiver and was resurrected to eternal life, again as an example to us of faith and love for the Father. Then to further increase our understanding for his glory He indwelled, in His faithful, His presence. His presence is so vast that we could never fully comprehend it. He represents Himself in the believers as The Holy Spirit to guide them through a fallen world and to His sacrifice of Himself, ultimately to His glory.

Imagine for a moment that you had children that would not pay attention to you or listen to your guidance. Through that defiance they put themselves in mortal danger. With their unwillingness to listen you were forced to sacrifice yourself to save them in the hope that your willingness to take their place in death would reconcile them to you. With your physical presence gone you left instructions for your children to learn from the wisdom they had previously ignored. That sounds like an amazing father, one I’d turn toward and seek to know. That father exists and His instructions are here for us. The father is God. He sacrificed Himself for us in the form of Jesus Christ, The Son. His instructions were left written on our hearts as The Holy Spirit. (Jeremiah 31:33) “I will put my law [guidance] within them, and I will write it on their hearts. And I will be their God, and they shall be my people.” (Galatians 4:6) And because you are sons [brothers of Jesus], God has sent the Spirit of His Son into our hearts.